Trying out new dishes and local cuisine should be an essential part of traveling. Some people actually travel just for food. I believe Slovakia has much more to offer than just a delicious cuisine, but why not to combine a passion for traveling with a passion for eating? Wherever you decide to go, those are 5 traditional dishes you need to try while you are in Slovakia. The best thing is, they are not linked to a specific location and, if you know where to look, you can try them out pretty much anywhere in Slovakia.

Buchty na pare is one of the “childhood favorites” and I am pretty sure that many grandmas still prefer to make them at home, even though you can buy them in supermarkets. This dish consists of steamed dumplings with a filling, usually jam or chocolate, with melted butter, powdered sugar and cacao on top. You can consider it as a dessert, but locals typically eat it as a main dish. This dish was especially popular during the communist era, since the main ingredients – milk, butter, flour, and eggs were very cheap back then. If you don’t have any Slovak grandma who would prepare this treat for you, you can always visit Buchtáreň in Bratislava. It is a first street food stand of this kind, serving traditional food like buchty na pare. It is super popular, not just among tourists, but between locals as well! 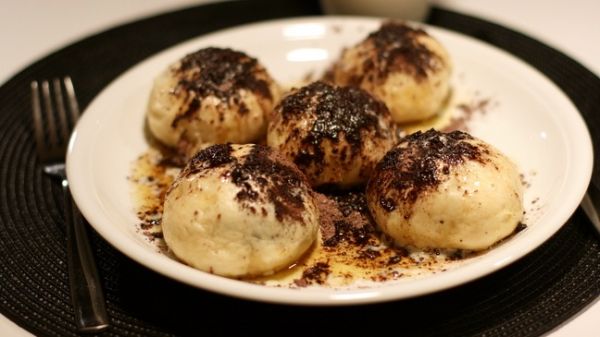 This is the Slovak classic! Bryndzové halušky is considered a national dish. It is made out of potato dumplings, sheep cheese called “bryndza”, sour cream, and bacon. This combination may not sound appealing to everyone, but trust me, it is the best dish you can have! You can find it on a menu of almost every restaurant, and it is not difficult to cook, so wherever you go, there are high chances that your halušky will be just fine. But, if you want to enjoy it in a truly traditional atmosphere, then I would suggest finding the nearest “salaš” or “koliba”. Those two types of restaurants are usually in villages where they breed sheep or in the mountains area. You can recognize them easily: exteriors and interiors are made out of wood, and your waitress will be,  most likely, wearing “kroj”, a traditional folk dress. For example, a place just like that would be Salaš Krajinka.

Kapustnica is cabbage soup with mushrooms, sausage and lot of red paprika seasoning, served with bread. There is no universal recipe. Some people add potatoes, some add plums or apples, some add smoked meat, etc. Of course, everyone says their kapustnica is the best, and that is the only valid kapustnica recipe. It is one of our traditional dishes, so in each part of Slovakia, the recipe will be a bit different. Some families even make a white version of the soup, mixed with heavy cream. Traditionally, we serve this soup on the Christmas Eve. There is also a very lovely custom that on the 24th of December, the president cooks this soup for homeless people. The best places to get kapustnica are again, “salaš” or “koliba”, but during the winter almost every restaurant will have it in their seasonal menu.

Vyprážaný syr is also referred as a “trash of gastronomy” or “culinary garbage”, but we all secretly love it and can’t get enough of it. It is a deep-fried block cheese (Gouda or Eidam), served with potatoes or french fries and tartar sauce. Not very healthy, but yet so good. It is a great hangover dish, and you won’t find it in any fancy restaurant, so get out of the Bratislava city center and explore nearby neighborhoods or villages. If you want it in a genuinely classical setting, just find the most unpleasant-looking pub with drunk older men inside, and there you go! You are going to love it. If you have only a few hours in Bratislava, but really want to try vyprážaný syr, then you can go to the restaurant Divný Janko in Bratislava city center.

Lokša is a pancake made out of flour and potatoes. There are two typical ways to eat it – sweet and salty. The sweet version is usually served with powdered sugar, poppy seeds, butter, and marmalade. The salty version can be served with cabbage or meat. You can find it very often in the Christmas markets. During autumn and winter, when it’s the duck and goose season, all the restaurants have on their menu a delicious dish: duck or goose with red cabbage and lokša.  It goes best with red wine. Yummy! You can also find lokša in the fine dining restaurants, since to make it right, you need some advanced cooking skills. But again, if you go to “salaš” or “koliba”, you will find this traditional dish there.

Slovak cuisine is very diverse; it is influenced by Russia, Hungary, Bavaria, and even Balkan. There is something for the meat lovers as well as vegetarians, and nowadays also a vegan selection is reasonably good! If you have no eating restrictions, I suggest trying many different dishes, in order to find your favorite. Slovak food is relatively cheap and delicious, so you really need to try these 5 traditional dishes while in Slovakia. 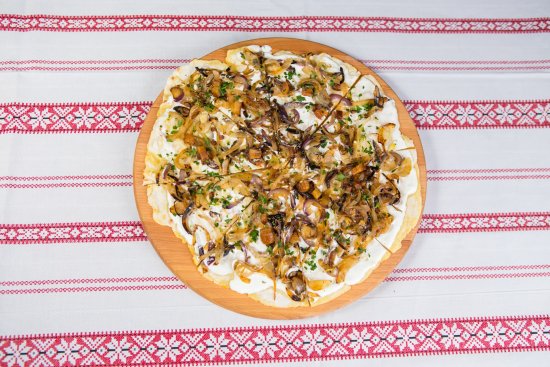